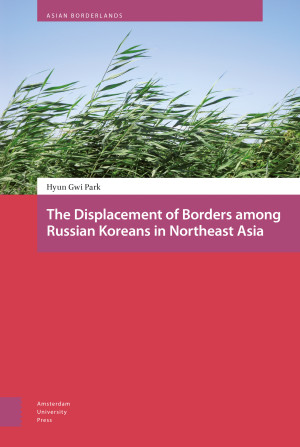 For many, the image of reeds on the cover of a book titled The Displacements of Borders Among Russian Koreans in Northeast Asia may seem to be an odd choice. Yet, for Hyun Gwi Park’s first monograph the image is part of a dualistic metaphor, along with the image of a huge rock, that frequently appeared to herself as well as to her study subjects. Namely, it symbolizes the way how many of her interlocutors remember the past and experience the present of being Koreans in Russia. The rock in their minds epitomizes sentiments associated with “heavy,” “immobile,” and “repressive,” thus referring to the state violence and forceful deportation encountered throughout the twentieth century. Reeds, on the other hand, cling to eye as something “supple,” “scattered,” and “lush,” and consequently embodied the idea of human adaptability to and hard labor in alien and unfriendly environments. Park focuses on and her argument flows out of the latter part of the metaphor. However, the choice was not merely an analytical move to bypass traditional scholarly debates on the relationship between the state and ethnic violence in the Soviet Union. Rather, readers are advised to abandon the perspective of seeing Koreans in Russia as a tight-knitted community, and linked to nicely delineated territories. And, consequently, to avoid viewing their history and social milieus as being penetrated by emotions of grief and anger for their historical displacements from Korea, the Russian Far East (RFE), and Central Asia. Instead, the main running thread that readers should glean from the chapters is to view past and present lives of Russian Koreans through the lens of kinship and family-based networks. In other words, it is their flexible “sociality” that hallmarks their interactions with each other, with the past, and many everyday experiences (from economic occupations to celebrating traditional rituals).

In her monograph, Park presents a historical and ethnographic inquiry into lives of a Korean community that was and is scattered across the aforementioned three regions. Besides the geographical differences, time created other divergences such as between generations and socioeconomic status. The book covers three distinct periods: the late 19th and early 20th century (when Koreans arrived in the RFE from the northern territories of the Choseon dynasty), the mid-1930s until 1956 (their Soviet forceful deportation to Central Asia), and the 1990s and early 2000s (when some but not all returned back to the RFE). Historicizing the lives of these people is not, however, the main goal of Park. Rather, the author explores how Korean kinship relations, identity, and memory over time have been shaped against the backdrop of state violence, nationality policies, the history of socialism and post-socialism, and new opportunities arising after 1991, with migration waves in between. Answers on these questions came from a number field trips after 2000, ethnographic observations, and some archival research.

The first chapter out of five provides a broad historical outline of the Korean question, namely the emergence of a loosely defined Korean community as a socio-historical phenomenon in Tsarist Russia, as well how different representations about them in the RFE began to emerge. Avoiding a traditional historical method, the author looks at how Koreans throughout times have closely been related to the loosening and tightening of the border regime in places where they lived in. Attempts by Tsarist administrators to restrict the ambiguous nature of its borders in the RFE were often set up in relation to the Korean question, such as categorizing ethnicities, providing regulations for settlers, and legal requirements for cross-border traffic. Erecting physical barriers was not enough, and was just one part of the bigger picture. Following the work of Nancy Munn and the concept of “somatic space”, Park tries to show how the governmental regulation of the Korean community was much more based on “interactions between bodily actors and terrestrial spaces.” (p. 58-59) As a side note, Park fetches sometimes interesting details to support her claims. So, for example, it turned out that many of the 19th and 20th Russian settlers in the region quickly came to see the RFE as a “sickly child,” to metaphorically describe the alien and harsh conditions for agricultural cultivation. For Koreans, however, the RFE was “the biological mother” and “an extension of the northern part of Korea from whence they had originated.” (p. 61)

The second chapter, then, seeks to unravel different aspects of migration waves occurring after 1956 (when travel restrictions on Koreans in Central Asia were lifted), but the stress is put on events happening during the 1990s and early 2000s. The author wants to understand how relationships between older and younger generations of Koreans, and socioeconomic opportunities have come to define one’s identity. In particular, she pushes back against the general tendency amongst academics and policy-makers to see migration as a unitary phenomenon with common denominators such as push versus pull factors, political versus economic, or structural versus personal. It would be better, Park argues, to leave aside the oppositional perspectives on migration, and rather take the kinship and family ties as central to understand “ethnic migration.” In particular, multiple differences existed in the timing, motivations (e.g. some returned to find a lost sense of belonging, others for employment prospects), and in the types of communities (i.e. there were Russian Koreans, Chinese Koreans, and seasonal workers). But the 1990s also proved to be seriously challenging, when migration and citizenship laws made permanent residence hard to attain, or when local Russians resented the arrival of Koreans through exclusionary practices and stigmatization.

The third chapter looks at how agricultural practices and mobility within the political economy during and after the Soviet era was a significant medium through which a transformation of self-identification amongst Koreans occurred. In particular, it starts off with a closer look at what it meant for many “to be hard-working,” a frequently-invocated identity trait amongst Russian Koreans. Thus, Park assumes that “hard working” became “the normative criterion for one’s behaviour or approach to life” and “how this trait of Koreans’ work ethic was naturalized within the historical specificity of Soviet socialism.” Park, following the recent work on Stakhanovite ideology, emphasizes how the appropriation of this self-identification was even more acute amongst those nationalities and communities in the Soviet Union that endured stigmatizations as “enemy nations.” The author’s mission in this chapter is, then, to understand how the Stakhanovite state ideology not only manifested itself amongst Russian Koreans, but also how it furtively consolidated itself through cultural devices (such as rice cultivation, or the gobonjil system). Park keeps away from assuming that the state doctrinairely and forcefully imposed such ideologies on its subjects. (p. 116-118)

Following up on new forms of subsistence economy that emerged at the end of the previous century, the next chapter examines how domestic livelihood activities too were imbued with kinship and gender realities. Departing from Levi-Strauss’ “house society” (an essential pillar to understand human societies), Park wants to demonstrate that the example of the “greenhouse” exemplifies a projection of the “male-gendered  person, which is an objectified form of the moral values of samostoiatel’nost’ of each household,” but it only when it too is connected to the “female centred indoor space of the house.” (p. 141-142) To put it otherwise, Park views in the cultivation of vegetables by Russian Koreans a manifestation of a moral code, centred on the male, who embodies the virtues such as making sacrifices for the family and the wider kinship circle. This also finds resonance in “inter-domestic spaces as manifested by acts of exchange in hospitality […] where women stand central.” (p. 178) The final chapter extends the analysis of Korean sociality within a spatial context, but puts public space central: the Korean House in Ussuriisk. Instead of looking at personal and domestic relationships, the Korean House is used a case-study to understand political changes in post-Soviet space, and how the meaning of Korean collectivity and diaspora politics have been articulated.

Despite its merits, certain drawbacks hamper the overall argument and presentation of the monograph. The title seems to be the most obvious one: while it refers to a study about Russian Koreans in Northeast Asia, it remains rather a Russia-centred study (not the least because the field research has been done in very particular places in the RFE). References to the Korean peninsula, Manchuria, and to a lesser extent Japan, make their occasional but unsubstantial appearances. Readers will find quite a bit of interesting information about the late 19th century and early 20th century, but the period between 1956 and 1990s is constituted by an awkward silence. Archival research the State Archive of the Primorksii Krai or the Russian Federal Archive of the Far East may have eased this. There are too some occasional transcription slips, though it is not clear whether on Park’s or her interlocutors’ part. Examples are po lichnoi prichine (not prichnoi) on p.103, semeynyi sovet (not semmonyi) on p. 89, or uslugi (not uslogi) on p. 104.

Based on this review, one may rightly feel that the first three chapters come in as the strongest because they provide a better sense of direction. Park shows in detail how “Koreans’ internal displacement resulted in a highly flexible economic life based on widespread mobile agriculture and collective, kinship-based temporary groups,” as well as how horizontal (over genealogical) and de-territorialized kinship relations have come to occupy a prominent place. The latter two parts, however, take a more nebulous position within the larger framework of the book. While they exemplify how earlier kinship observations play out in domestic and public spaces, they also show how many of Park’s lively insights are indeed interspersed over the five chapters. The issue here is that readers could fail to notice this monograph’s contributions, which does much to underscore the salience of kinship in social relations. It would be thus helpful if the author could have mentioned earlier in the book how kinship is specifically understood, employed, and how it connects her ethnographic and historical research. An overview of how her book fits within the longer trend of kinship studies and anthropology would surely have helped the reader to enjoy the intellectual ride. Finally, Park is clearly a prolific reader in Russian and English secondary literature and well-versed in various sociological, historical, and anthropological strands of scholarship (with names ranging from James C. Scott, Simmel, Bourdieu, and De Certeau amongst others). While advantageous in some respects, pulling the reader into multiple directions while not pursuing all of them entirely can sometimes have a disorienting effect for unacquainted scholars and general readership.

Nonetheless, readers will be thankful for its merits. Hyun Gwi Park’s monograph is a thought-provoking and welcome read for specialists and non-specialists alike. It introduces to us a history of and a present-day insight into the life of a transnational diaspora in places that have thus far been the field of (Russian-speaking) regionalists. Through its study of a seemingly peripheral Korean community in Russia, Park engaged with larger English historiographical debates, such as on the Soviet nationality policies, memory and life of (post-)socialist generations, and kinship studies in anthropology.